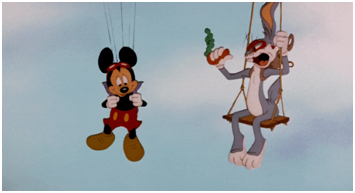 1. Pauvre Pierrot, made from 500 hand-painted images to show a 15-minute animation.

2. Birmingham printer John Barnes Linnett invented Flip books, showing animation by flipping through the pages of a book in 1868.

4. From 1938-1942 John Mercer was also married to Margie Hynes, who provided the voice of Olive Oyl, in Popeye.

5. Academy Awards for Best Animated Feature films were first given in 2001 to Shrek.

6. Did you know Bambi, Thumper and Donald Duck have all had asteroids named after them. Also there is an asteroid Disneya named after Walt Disney.

7. Disney’s Snow White and The Seven Dwarfs was the first major full-length cartoon film In 1937.

8. Also, did you know that In ‘Who Framed Roger Rabbit’, Mickey Mouse and Bugs Bunny appear on-screen together, yes that’s right! Their respective owners, Warner Bros and Disney, agreed to this on the a few conditions.

9. Another interesting fact is Popeye was created during the Great Depression so that to encourage people to eat spinach because of its high iron content, because many people could not afford meat at that time.

10. The two most unlikely characters are connected; Optimus Prime and Eeyore were voiced by the same person, Peter Cullen!

11. Bugs Bunny was “born” in 1938 in Brooklyn, New York City, Mel Blanc is his original voice actor and his accent an equal blend of the Bronx and Brooklyn dialects.

12. Why do you think a lot of cartoon characters have four-fingered hands instead of five? The reason is simple – hands with four fingers were easier to draw and animate.

14. Tweety was created in 1942 by Bob Clampett through the short A Tale of Two Kitties, where two hungry cats named Babbit and Catstello try to hunt her. But did you know, Tweety’s original name was Orson, but it was later changed.

15. The famous Donal Duck’s birthday is officially recognized as June 9, 1934, when he appeared in this debut film, The Wise Little Hen. Also, his birthday is given as simply “Friday the 13th”, because of which he experiences bad luck in almost all his cartoon appearances!